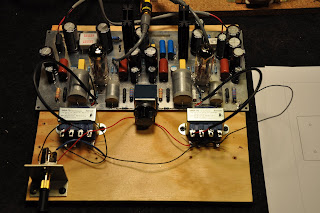 It has been quite a while since my last post on the prototype headphone amp, seen above. I built this up for the folks at Reference Media for a possible product launch that never happened, sadly. So, it's been sitting on the shelf for about a year now and I decided it was time to do something with it!

While visiting my brother earlier this month I noted how he is SO into music but really doesn't have anything decent for play back. Because of his situation he listens mostly with headphones so I decided to build him a handy dandy headphone amplifier. But, I needed a box or case to put it in, and to make a few decisions on functionality.

First, the functionality aspect of the design. The basic circuit can be adapted to serve many functions being set up as two gain stages separated by a volume control. I decided to make it more flexible than a straight amplifier by providing three inputs, a selector switch, defeat-able line outs for driving an amp (or powered speakers), a power switch and pilot light. A little less functionality than the 66-001 preamp; no balance control or mono switch, and less input options. With that figured out I could go shopping for parts, scavenging whatever I could from my spare parts collection (ever expanding I might add). 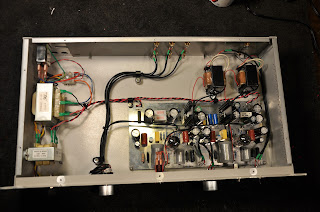 For the casework, I knew that the power transformers would be on-board (unlike the 66-001 series of products which have external regulated supplies), so I would need to find a box big enough to house everything. We have a local PC recycle place that has all sorts of discarded electronics for relatively cheap (though lately they have put ridiculous prices on some real junk) where I found an old Avid 888, an 8 channel 48K Pro-Tools interface from the '90's for $15.00. Perfect! Just need to drill a few holes, fill in a few more and do a custom faceplate. 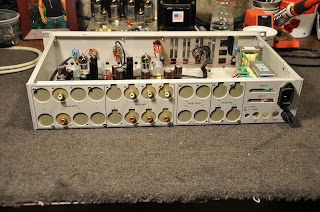 Every project I do has a phase where I just sit and stare at it for a while, trying to figure out where everything will go. I ended up arranging it in a logical fashion; power transformer on the left side of the chassis because that's where the IEC AC inlet filter and fuse are mounted, PCB and output transformers to the right, with the OPT's in the rear near the output jacks. Next I had to fill the holes in the rear panel - 24 XLR sized holes that is! I happened to have an 18 gauge painted steel panel left over from something. It would need to be cut to size with holes for RCA jacks drilled into it. A few minutes with my angle grinder w/ cutoff wheel and drill press took care of that. I laid out the hole pattern for the circuit board, drilled and installed it with 4-40 screws and nuts, using nits as standoffs as well.

So far everything has been sourced from my spare parts but I needed some switches, knobs and jacks. That would come later, but for purposes of testing I wired in temporary jacks and fired it up. Having decided to change the tubes from ECC99's to the more common 12au7a's meant that some circuit parameters would need to be tweaked to gain best performance. Knowing that the max level it will probably ever see is 2Vrms from a CD player or DAC (ridiculous high level IMO) I ran some sweeps at that level to gauge the distortion. Not so good. Looks like the input stage would need more headroom, or higher plate voltage. No problem, I removed the PSU dropping resistor for that stage and wired in a 5K pot. This way I could adjust the pot, monitor the plate voltage and do sweeps to check distortion at different settings, keeping the plate and cathode resistors constant. It turned out that the best setting increased the plate by about 25V; the 4.7K dropping resistor was replaced by a 1.8K resistor. As you can see from the final sweeps the distortion is below 1% across most of the audio bandwidth, and is dominated by 2nd and 3rd harmonics, the higher order stuff down in the noise floor.The increased distortion at low frequencies is due to the output transformer saturating but at low frequencies our ear is less sensitive to distortion. Higher up the distortion remains fairly constant with frequency which is a good thing.

The distortion readings shown are at 1kHz. The top trace is the sweep and shows the frequency response, the black trace is THD, the rest of the traces are 2nd, 3rd, and higher harmonics (see legend at bottom of graph). The right channel shows slightly more distortion; this is due to differences in the tubes, which are never matched perfectly and are the biggest variable in designing tube circuits (modern passive components are pretty stable and precise in value). But the overall distortion in the right channel is at .321% THD, well below the theoretical 1% threshold of audibility. 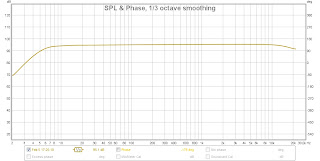 Shown above is the frequency response. Not bad for a transformer coupled tube amp! The transformers are actually 70-volt speaker transformers. These work great for tube driven line stages because of their high impedance ratio, and you have your choice of impedance taps too. Though they're only designed for about 50Hz to 15kHz in their intended application, the fact that they're not being driven more than about 1/2 watt into headphones pushes their bandwidth to full spectrum. They have the added benefit of very low output impedance- in this circuit about 10 ohms; great for even low impedance 32 ohm 'phones which are the most common these days. And into higher input impedance's typical of an amplifier (10K and above) they perform even better, able to drive long interconnects with no HF roll-off. Plus, in my opinion, transformer coupled circuits have a richer, more harmonic and punchy sound.

So now everything is finished, tested and tweaked, ready for the faceplate. Below is an image of what that will look like, it's about a week out as of today.

This turned out to be a fun little project! And hopefully fun for my brother, too. Here's the final look with the faceplate~ 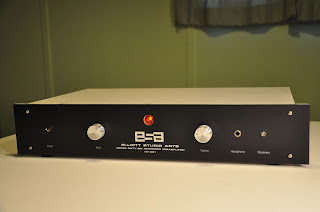